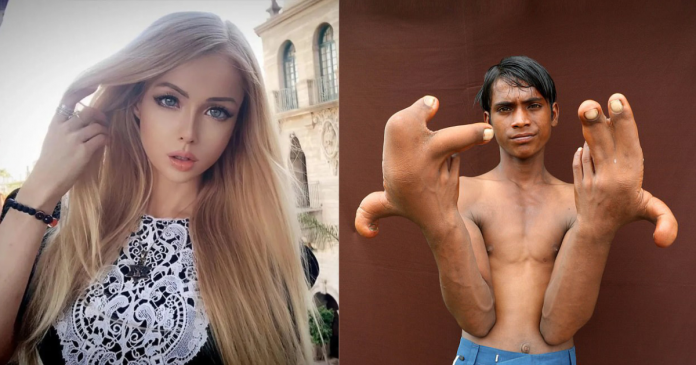 Each of us has our own special mix of qualities and characteristics. Nobody else on Earth can look exactly like the people we’ve compiled below. Many of their members hold Guinness World Records for things like having the largest hand, the strongest man, and the longest tongue.

Would you like to know what makes them unique? Let’s look at the photographs by scrolling down. You won’t believe these people exist in real life, but we know they’ll blow your mind.

Tarik is an Indian boy. Villagers in the area call him the “devil” because his hands grow to be 12 inches long. He was born with big hands, and people think this is the result of a curse. Some doctors think he might have elephant foot disease, but this hasn’t been proven.

Asha Mandela, who calls herself “Black Rapunzel,” has the longest dreadlocks in the world, according to the Guinness Book of World Records. Mandela’s long dreadlocks are about 19 feet and 6 inches long.

Valeria Lukyanova is a Ukrainian model and well-known influencer who looks like a real-life Barbie doll. She looks the most like Barbie out of all the real people in the world.

Zhenhuan is the hairiest person anyone has ever met. He has hair on 96% of his body. Because of this, Zhenhuan is also called “the hair boy.” In 2009,

#5. The tallest man in the world

According to Guinness World Records, Sultan Kosen is the tallest living human at 251 cm. Sultan’s height comes from pituitary gigantism. He must leave school midyear due to his situation. Kosen was able to help his parents with household activities like hanging curtains and changing lightbulbs, which most youngsters his age couldn’t manage.

Jyoti Amge of Nagpur, India, is the world’s smallest woman. She is less than 25 inches tall. She wants to go to college and become a popular actress. At her current weight of 12 pounds, she is only nine pounds heavier than when she was born.

Because his skin is blue, Paul Karason is better known as Papa Smurf. He didn’t always have this color of skin. Paul’s skin has changed color because he used colloidal silver to treat a skin problem.

When the silver in the medicine mixed with the sun, it caused argyria, which is a medical term for blue skin. But that didn’t stop him from eating silver. Karason ate silver until he died because he thought it would cure his acid reflux, arthritis, and other illnesses.

#8. The world’s most tattooed woman

Julia Gnuse, known as “The Irvine Walker” or “The Illustrated Lady,” holds the Guinness World Record for having 95% of her body tattooed. Her tattoos include her favorite cartoons, actors, and a self-portrait.

The legs of British woman Mandy Sellars just keep growing. Sellars jokes that she is a “part-time television celebrity” despite possessing a unique genetic abnormality. Simply put, she is unable to move around since her condition has caused an overgrowth of tissue in both of her legs.

Sellars refuses to be defined solely by her illness since she knows there is more to her than that. Actually, she’s telling her tale to help others going through the same kinds of physical issues that she has.

Nick Stoeberl has the longest tongue in the world. He can lick his nose and elbows with ease. He once tried to impress the judges on America’s Got Talent by making a heart with his tongue.

Evidently, Amoo Hadji has never heard the old proverb that “cleanliness is next to godliness,” because he is anything but clean. Hadji, widely considered to be the dirtiest man on earth, is rumored to have gone over 65 years without so much as a bath.

Hadji has taken up some rather unusual pastimes, such as eating corpses and smoking elephant dung, to keep himself company, in addition to not taking baths.

Julia Zlata is the most flexible woman in the world. She can twist her body into any position with ease and grace. Zlata was born with flexible limbs, and she works hard to improve the skill that has made her famous.

Mara José Cristerna Méndez is a Mexican lawyer who is also called “The Vampire Woman” or, as she prefers, “The Jaguar Woman.” Cristerna’s body is a powerful way for her to send a message against domestic violence.

Maria has changed her body in many ways, including getting dental implants, splitting her tongue, making her ears bigger, tattooing her eyes, and more. She also has tattoos on 96% of her body. Cristerna is a criminal defense lawyer, but she also has her own clothing line and tattoo shop.

In the past, models also needed to have a small waist. Many of these models used to eat in a variety of unhealthy ways to get to that size. But none of them could compare to Michele Kobke, who is known for having the world’s smallest waist. Kobke has said that she hasn’t taken off her corset in three years because it helps her keep her 16-inch waist.

Thin After three years of wearing a corset every day, Michele Koebke’s small waist has gone from 64 cm to barely 40 cm. She even wears a corset to keep her waist slim while she sleeps.

This French Designer Creates Dresses Like No One Else(16 Pics)

A Woman Quits Teaching To Learn How To Use Makeup To...

A Pregnant Teacher Asks Her 6-Year-Old Students For Parenting Advice and...

An Architect Imagines A Utopian Future In Which Buildings May Breathe...