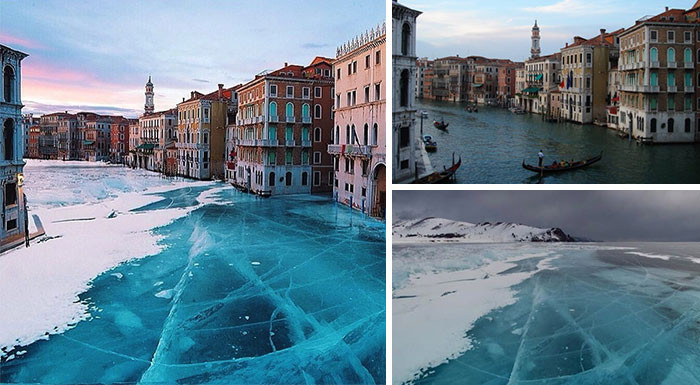 Recently, the term “fake news” has become very popular, but with the photo editing tools we have today, even those of us with the sharpest eyes can be fooled easily. From the famous photo of the first dab in history to the viral rice wave, how many of these photos do you think are 100% real? The list below shows you the truth, and sometimes the ugly truth, because of fake photos. Here are some of the most famous photos on the Internet. These shocking photos show again that you can’t believe everything you see online.

Chris Hadfield is probably the most beloved astronaut. His space vlogs answered many questions about life in zero gravity, from sleeping to brushing your teeth. Although this style of vlogging is unique, this amazing guy would never use drugs while travelling in space. Chris was actually aiming to surprise his coworkers with Easter eggs!

The “fried rice meme” depicting a man creating a rice wave in his pan became viral. After this shot went viral, people from around the world sent in their own rice wave edited images. Since the rice wave is a Tokyo phony food shop sculpture, the initial photo is already fake.

This famous selfie of a pilot taking a picture of himself in the air was actually taken after he landed, but it’s still a cool selfie!

Even though a photo of a bear chasing a cyclist will have a much bigger effect on you than a photo of a bear running through an empty street, no one was hurt while making this photo. Even though we don’t know much about the original photo, we think it was taken in Yellowstone National Park.

Photoshopped photographs of archaeologists discovering enormous skeletons abound online. This would start a new chapter in history and prove several myths. Since these pictures of skeletons are fake, no science or history museum has ever believed what they say.

#6 Picture Of A Dwarf Giraffe

A photo of a giraffe with dwarfism has been used online more than once. Giraffes, like other animals, can have dwarfism, but this photo is fake..

#7 First Dab In The History

Unfortunately, this photo is a behind-the-scenes shot from the 2017 film Dunkirk, not the first dab from the 20th century.

The #10yearchallenge went viral recently as people from around the world shared their changes. Some used the hashtag to warn others about our devastating impact on Earth. Deforestation, a major environmental issue in the 21st century, was warned against. The image used to promote the message was a phony before-and-after photo of a rainforest cut down completely.

#9 A Photo Of Marilyn Monroe And Elizabeth Taylor

What a cool photo to have two beauty icons together. Unfortunately, Elizabeth Taylor was edited into a Marilyn Monroe photo. Marilyn Monroe has been photoshopped to appear with Elvis Presley, James Dean, and John F. Kennedy before.

#10 The Mustache Wasn’t Enough, They Had To Add Those Angry Eyebrows

Animals that look weird or cute, or both, are especially popular on the internet. So it shouldn’t be a surprise that a picture of a cute cat with a mustache and eyebrows would go viral. Well, there is a bright side to this story: the cat does have that amazing mustache, but the eyebrows are just the result of some clever photo editing.

There’s no need to use too much Photoshop to make lenticular clouds look better. The person who made the Photoshop version didn’t really think that way, though. Well, we can tell that the whole internet didn’t think that way because many people chose fake photos as their desktops.

Venice is one of the world’s most beautiful cities, therefore there’s no need to photoshop a frozen Lake Baikal in Russia to make it look better.

Most of us would love to see or stay in, is a photo of a Thai rock and a German castle.

We believe altered pictures that make no sense on the internet. A BMW-riding cow was one of those false viral photographs. Since the cow was chilling on the grass as intended, no car was injured in this snap.

#15 Moon Perfectly Fitting On A Skyscraper

There is a strange fixation on moons in viral photos. It seems that if you want a photo to go viral, all you have to do is put a moon in the most unlikely place, and you’re done.

Some time ago, this well-known picture was the perfect example of internet humor. The ironic mistake was something that people always shared online. Unfortunately, the photo was edited so well that it wasn’t easy to tell that it was fake.

When you see pictures like these, you’ll definitely want to go on a trip. That kind of island doesn’t exist, but you can visit Molokini, an island in Hawaii that looks like the moon and is between Maui and Kahoolawe.

Even though cool dudes don’t gaze at explosions, this photo was taken 7 years after Einstein’s death.

Weird creatures would be among the top 10 internet topics. It seems like everyone loves finding unusual and unique species, but there is no need to make one with Photoshop or try to fool people into thinking it exists.

#20 A child in Syria sleeps near the graves of his dead parents.

A picture of a child sleeping next to the graves of his dead parents in Syria turned out to be staged since the child knew the photographer and the graves did not belong to his parents. Even though this kind of photojournalism is still very sad, it shows once again that you can’t believe everything you see on the

25 Good Cat Posts That Will Hopefully Brighten Your Day

23 Adorable Photos Taken by the Mom Who Adopted An Adorable...

Japanese Artist Has Been Creating Miniature Dioramas Every Day For The...