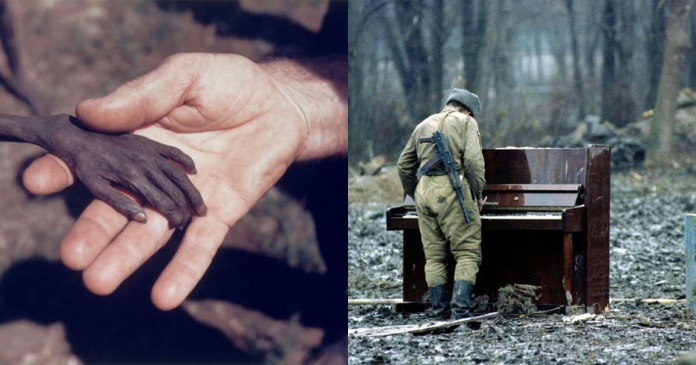 They show our pain and our victories, our persistence and failures, our kindness and hatred, our intelligence and our stupidity. From remembering the Flower Power movement to seeing chilling photos of the gas chamber in a concentration camp, war photos, pictures of the tsunami, and the battle of Kursk, there is a lot to see. These strong pictures show both the good and the bad in people.

Some of these old pictures may be more interesting to some of our readers than to others. But hopefully, they will remind us all that the world could always use a little more love, tolerance, compassion, and understanding.

P.S.: We do our best to give credit to each photographer, but sometimes it’s impossible to find them. If you know who the missing authors are, please leave a comment.

2. Inside an Auschwitz gas chamber

4. A Russian soldier playing an abandoned piano in Chechnya in 1994

5. Christians protect Muslims during prayer in the midst of the 2011 uprisings in Cairo, Egypt

6. A firefighter gives water to a koala during the devastating Black Saturday bushfires in Victoria, Australia, in 2009

9. Embracing couple in the rubble of a collapsed factory

11. “Leao” sits for a second day at the grave of her owner, who died in the 2011 Rio de Janeiro landslides.

14. The Graves of a Catholic woman and her Protestant husband, Holland, 1888

15. Russian soldiers preparing for the Battle of Kursk, July 1943

17. Greg Cook hugs his dog Coco after finding her inside his destroyed home in Alabama following the Tornado in March, 2012

18. A woman sits amidst the wreckage caused by a massive earthquake and ensuing tsunam, in Natori, northern Japan, in March 2011

19. An old WW2 Russian tank veteran finally found the old tank in which he passed through the entire war – standing in a small Russian town as a monument

20. Alcoholic father with his son

A Family-Run Farm Took In A Rescued Fox That Has Become...

Plan On Getting A Tattoo? Then Consider How It Will Age...