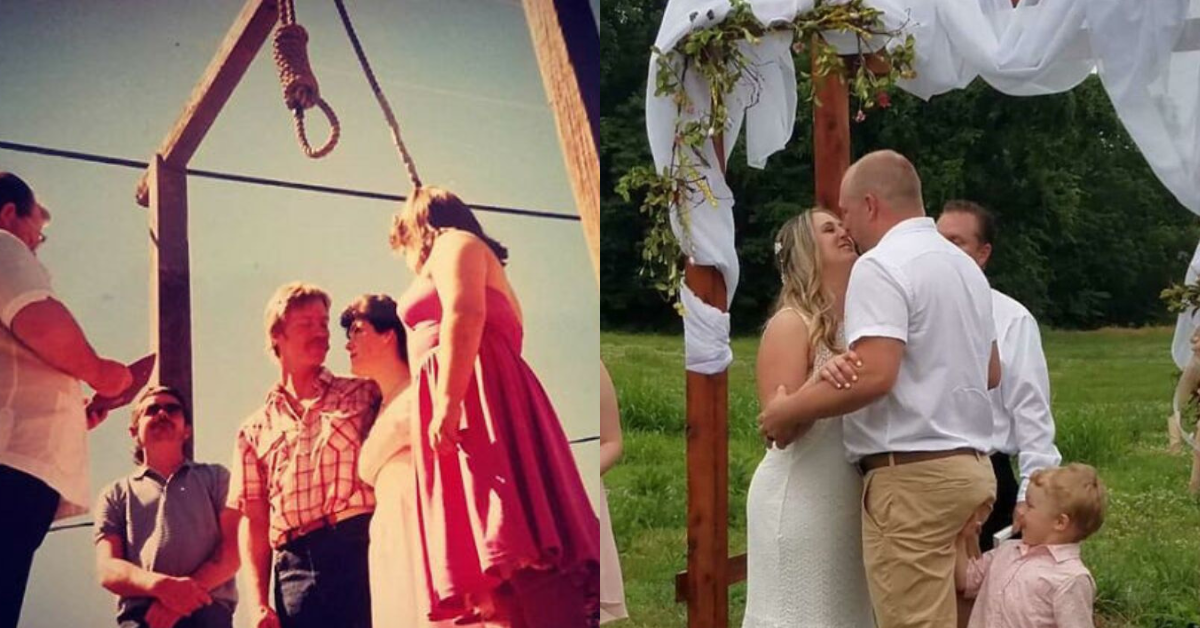 Mike Bender is the co-founder of the “Awkward Family Images” Instagram account, which celebrates the most cringe-worthy photos of our families. When it comes to cringe-worthy images, we’re all in this together.

The inherent awkwardness of love is the inspiration for this collection of our best couple images and stories, which I’ve compiled in honor of Valentine’s Day.

My mother had hung a picture of me as a child on the wall when I went to visit her on a weekend. At first, her decision to memorialize something so cringeworthy seemed unusual, but as I thought about it further, she had a brilliant idea.

Due to the fact that everyone has these kinds of images lying around, I came up with the idea of starting an online community where people could post their weird family photos, and that’s how AFP came to be. At the time, we had no idea it would become so popular.

Since 2009, we have received over 1.5 million images from all over the world, which is a lot of photos.

Anything from the 1970s and 1980s is a favorite of mine… For me, it was a golden period of the picture studio, when families would flock to take photos and willingly participate in the most awkward positions, such as piling on top of one another. It was a deliciously awkward time in my life, as I look back on it.

As soon as we launched our website and Instagram, we received a lot of positive feedback. Instead of making fun of people, we’ve always celebrated awkwardness. In the end, it’s a badge of pride, something to be proud of, to post an uncomfortable photo of yourself.

Family portraits and wedding photos may be the next most popular things, after-school photos, and newborn images.

All of our best photos are featured in a new game where players can use famous movie lines to describe the images. This is a terrific way to spread the awkwardness while having a good time with the whole family! Here, you can buy the game here.

“They encountered a black metal band during their engagement shoot.”

“My favorite picture of my parents. Them on their wedding day, 1991.”

“My grandmother had this version. If someone in the family had broken up with a partner, she was ready with a Sharpie to remove the offending partner.”

“Dad was sure the church photo would only be taken from the waist up.”

“Our wedding photographer was the worst in the world. This seems to say it all.”

I was looking through the pictures when I noticed that my big hair completely blocked out my husband. Then, one of my good friends said that the bush in the background “looks like a demon.”

“My four-year-old decided to shove a finger in my butt as the preacher shouted ‘Kiss the bride.'”

This picture shows my mother and father out on a date in the 1980s. Because I was born nine months later, my mother must have followed the instructions on my father’s shirt.

“Here’s my Mom and Dad in September 1970. Credit to the photographer for the special effects pre-photoshop.”

“We were having a great time at my wedding.”

“I was the wedding photographer for my husband’s sister’s wedding.” It wasn’t until I was done taking shots that I realized there were construction workers on the roof.

After their wedding banquet in 1971, my parents drove off on their honeymoon in a VW van.

“My husband and I wanted to take a family photo with our dog Rylee for Christmas, but he kept getting lost. When we got home, our photographer called and said, “I found where Rylee was.”

“My sister has prudently decided not to engage in this smooch-fest.”

Even after four children and 28 years together, despite the picture’s portrayal of dread and gloom,

“The chainsaw was a Christmas present from the next-door neighbor. Even though my father “looks like a possible serial killer,” my mother is smiling.

“My parents on their wedding day, Vancouver 1986.”

“After we had just finished 2 hours of wedding photos.”

“My parents in high school… I’m not sure what is going on here.”

“My parents in the late 80s. They loved floral!”

“My parents’ wedding photo taken in the early 60s with my mother wearing pan-stick makeup. My mom just looks SO happy, doesn’t she?”

My parents were attending a business event at the time of this photograph.

A newlywed photo shoot was taking place at the time. He was attempting to pose for romantic shots when something attracted his attention. “

‘Since our first date, I’ve told my husband that he fell in love with me,’ she says. Looking back at our engagement photos, it’s clear why.

Fortunately, we were able to get married just in time for COVID-19.” My new father-in-law was on a dig when I took this picture of us, and I loved it!

“Yes, this is a picture of my ring. We thought it would be cute to say “till death do us part,” but everyone thought it meant our love was over.”

“This is my parents getting hitched in Oatman, Arizona on the gallows in ’88. Yes, legally.”

“My aunt and uncle’s family portrait from the early ’90s.”

“Right after my parents got married, they went for a ride.”

“We were newlyweds and had no children at the time of our marriage….” This cat skeleton, named “Bones,” is all that is required. For our first family portrait, we chose to include him.

“We were told by the photographer to close our eyes and look calm. My fiance did a great job. I think he fell asleep, though.”

“Our ceremony was held at my grandparents’ church on the day after Thanksgiving, and they wanted to keep the festive decor in place.”

It’s like my grandmother is attempting to snatch my dad from his new wife!”