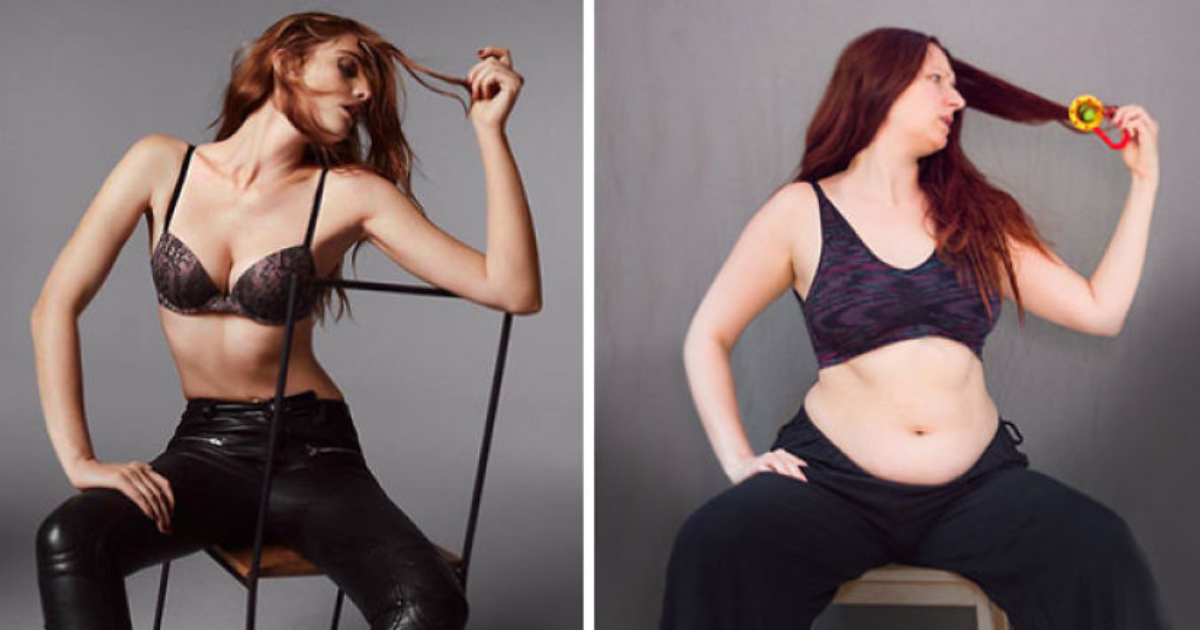 After dealing with societal demands to “snap back” after the birth of her child, a mother chose to recreate Victoria’s Secret campaign photographs in an effort to embrace her postpartum figure.
The author of the piece, a woman named Hana Erskine thought to be from Dubai, stated in it that she, like other women, put on a lot of weight while pregnant. She claims she wasn’t self-conscious about her appearance after giving birth to her lovely daughter, but it still took some time for her to accept her new physique.

Hana said she felt “unattractive” when she looked in the mirror, so she decided to do her own version of a Victoria’s Secret photo shoot to boost her self-esteem and make light of the less beautiful parts of motherhood.

As Hana said at the outset of her Bored Panda essay, “I was overwhelmed with pleasure and love for our daughter.” She went on to say that she wasn’t upset or depressed about her postpartum figure.

A man Hana knew in college, however, made her feel uncomfortable about her appearance after they ran into each other.

The first things he said to me were: “Oh my goodness, you really ballooned up in size! “Make an effort to improve your appearance,” Hana admitted on her blog.

She elaborated, “After returning home, I spent some time looking into the mirror, examining my postpartum physique, and suddenly I was feeling really unattractive.” In my mind, I was one of the “thin girls,” even though I was never considered skinny before my pregnancy.

The problem, as far as Hana was concerned, was that the media rarely celebrated the postpartum body, especially in her country.

Instead, there is the standard ideal depicted in media such as advertising and film.

The general consensus where I come from is that “a postpartum body or, basically, any not-model-like body is something that makes you very unattractive, so you should not show it until you are back in shape again-and get back in shape as quickly as you can, it cannot be that hard,” ” Hana typed out a note.

After giving birth to her daughter, Hana wanted to improve her self-esteem, so she took photos of herself that featured a “touch of motherhood” and highlighted her curves.

But the act of photographing her brought back her worries about her stretch marks and her growing bulk.

On the other hand, when I looked at my own photos, the first thing I thought was, “God, I am fat; I have to do some post-editing to make myself look skinnier, to make my skin look smoother, to retouch the dark circles under my eyes, to erase the second chin, etc.” She finally came clean and said as much.

Then I recalled the shoot’s true intent, and I refrained from making any physical adjustments, Hana explained in her journal. I realize now that I will never have the appearance of a fashion model.

She mimicked the poses of Victoria’s Secret models in their ad campaigns to normalize the appearance of postpartum bodies. And she learned to love her body for what it was, rather than for what it wasn’t, thanks to the photo session.

The mother told her online audience, “You are wonderful precisely the way you are.”

Stop putting yourself down by holding a mental competition with everyone else. It is extremely challenging, yet accomplishing it will provide a profound sense of joy and freedom.