Home Creativity Art Because of Banksy’s Art, I Gave Up Drinking And Drugs To Focus... 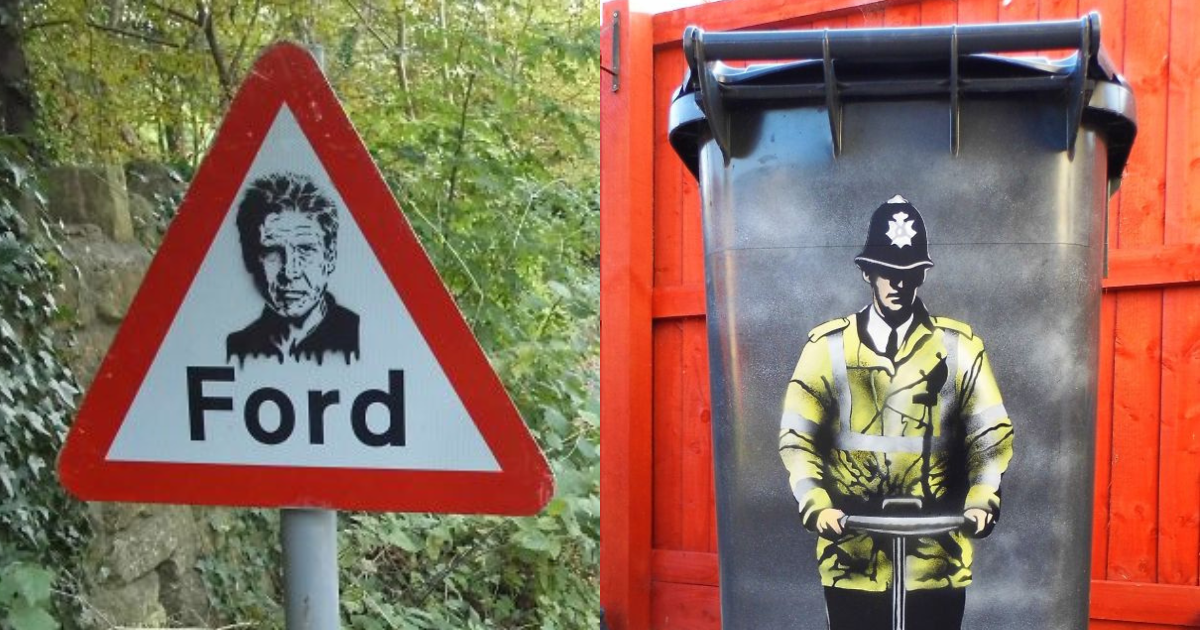 A recovering addict has switched from drugs to spray paint to make street art that looks like it was made by BANKSY.
Jamie Scanlon, from Weston-Super-Mare, Bristol, started using drugs and alcohol when he was a teenager. His life quickly got out of hand, and he thought about killing himself when his debts and addiction made him unable to work.
But after seeing the work of Banksy, a subversive street artist, Jamie, also known as JPS, was inspired to follow in the footsteps of his hero and give up his bad habits for good.

Paradise Falls in the Hood

Jamie, who is now 37, said, “When my addiction was at its worst, I was in a very bad place. But I’ve always liked art, so I was able to get myself together enough to go to one of Banksy’s shows in Bristol. Even though I was drunk, I thought it was amazing.”

“I had done some simple stenciling in school, so I was amazed at how quickly he could make big characters on the street.”I really felt his excitement, and from that moment on, I was determined to change my life and make something of myself.”At school, Jamie got an A in GCSE art, but he had to drop out of college and get a job when he was 19 because his family was having trouble paying the bills.

Jamie’s life went downhill after he got a job fixing shoes. He spent most of his money on expensive drug binges to deal with the sudden deaths of his father and two close friends. Jamie was so bad off because he was addicted to alcohol and crack cocaine that he stole and begged to get enough money to feed his addictions. At his worst, Jamie, who at one point owed £2,000 to drug dealers, even thought about killing himself after he lost his job in 2009 and became homeless and broke.

“Sometimes I would go out at night and paint small pieces around Weston-Super-Mare. It was a lot of fun, just like I thought it would be at the Banksy show. It really helped me get rid of it and get out of the mess I’d made for myself.””From there, I changed quickly, and by 2010, I was asked to be part of a big show in London put on by the artist Mason Storm.

I felt like I was getting a following right from the start, and any money I made from selling my work went right back into buying equipment to make my work bigger. Jamie makes stencils for his street art with the help of an assistant. He then uses special paint brushes, pens, and spray cans to put the stencils on walls in public places.

The Right to Bear Arms

Jamie says that his street art, which shows characters like Batman, Dangermouse, and Pennywise the Clown, is heavily influenced by pop culture, especially by fictional heroes and villains that he liked as a child. Jamie’s work can be seen around Bristol, but his quest to copy Banksy’s unique style has taken him as far away as Utsira, Norway, and Barcelona, Spain, where his street art can also be seen in public.

He said, “I’ve done works that people thought were by Banksy on purpose to trick the national media more than once, while my own name kept getting around in the underground.”It’s strange because I feel like I was pretty arrogant around Banksy at first. The mimicry was all done with a sense of humor.”

“But after some time, I realized that he was the reason I changed my life and, in a way, saved it.”

This Artist Fixes Broken Objects With Rusty Wire And Scissors (20...

Your Mother Will Live Longer If You Spend More Time With...

Ripped Aussie Granny, 64, Goes Viral After Posing in a Revealing...