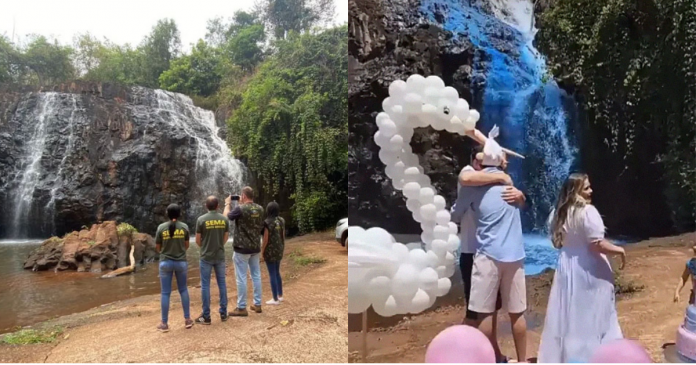 More and more parents are doing gender reveals for their babies. But the moment when parents-to-be tell the world their baby’s gender is not without its share of drama.
In the past few years, we’ve seen a lot of gender reveal parties that didn’t go as planned or were criticized for being too much. We can now add one more to that list.

A Brazilian couple made a lot of people angry when they dyed a nearby waterfall. The waterfall is 59 feet high and is located six kilometers from the center of the Tangará da Serra municipality. During a gender reveal party, they wore bright blue to tell everyone that they were having a boy.

When the couple posted a video on Instagram of the moment a waterfall turned blue to show that they were having a boy, people on the internet didn’t like it. After everyone got mad, they later took the video down.
Since then, Brazil’s environment ministry has started a probe, and the couple could be charged with a crime against the environment.

The incident is said to have happened in Tangará da Serra, which is part of the Queima Queima Pé river. The ministry said it was aware of the situation .Reports say that the river is popular with tourists who come to the Mato Grosso region. It is also the main source of water for the nearby town of Tangará da Serra.

They uploaded a video of the stunt to the internet

But people uploaded the clip again to many social media sites.

The river, which is called the Queima Pé river, is a popular place for tourists.

The gender-revealing party is a newer idea. In the 2000s, the practice began in the United States.

Jenna Karvunidis, who was pregnant when she announced the news on her ChicagoNow blog High Gloss and Sauce in 2008, was one of the first to do so. She had had several miscarriages before and wanted to celebrate the fact that her pregnancy was far enough along that the fetus’s gender could be known.

But as it started to become popular, parents started trying to top each other, often to get more attention on the internet. This quickly turned into a sort of online challenge.

which recently suffered a long drought

Couple paint a waterfall blue for a gender reveal party

And here’s how people reacted to it

Surprisingly, this isn’t a standalone case, as videos of other similar gender reveal parties can be seen on social media

Back in 2020, one couple used a pyrotechnic device at their “celebration” to start a wildfire that burned a lot of land.

The fire torched nearly 23,000 acres, destroying 20 buildings and taking the life of one firefighter

Here Are 25 Of WWF’s Most Powerful Ads

20 Examples Of Unconditional Doggie Love That Will Melt Your Heart

What Are The Differences Between True Love And Attachment?