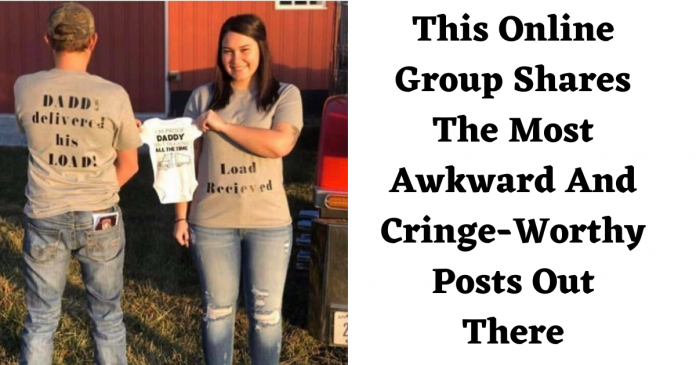 We tend to have a lot more in common with each other than we think. This is one of the best things about being a person. One of the best examples is that we’ve all done some awkward, embarrassing things that we wish we could go back in time and undo… or forget entirely. Maybe it’s a post we made on social media years and years ago that hurts to look at. Or maybe last week at school or work, you spilled your lunch all over yourself.

When you’re feeling bad about yourself, it can help to make fun of someone who’s done something even worse. This is where the well-known online community r/cringepics comes in. Some of the most embarrassing pictures ever posted online are on the subreddit. Look at the list below to see who is the worst.

#1 I Got Four Phone Calls From The Dealership Immediately After This, But Didn’t Pick Up

#2 When You Accidentally Make Two Big Announcements In One Photo

#3 Mistaking A Vietnamese Man For A Child

There are just over 1.5 million people who are part of the r/cringepics subreddit. It shows how successful the online community really is. It turns out that people really like to look at things that make them cringe. Or, rather, judging them in silence for making mistakes in public.

At the time this article was written, r/cringepics had been around for more than ten years. The subreddit was made in the middle of October 2012, which is a long time ago. Since then, it has shown some of the most powerful examples of awkward, embarrassing, and painful situations.

#4 Not A Single Spanish Player Sang During Their Anthem

#5 Tofu Is Only For Vegans

Anyone with a little bit of empathy can feel the shame that some of these posts give off. We cringe because we can imagine what it would be like to be that person.

When we’re in an embarrassing or really awkward situation, many of us might want to run away or hide from what’s going on. Some people say they didn’t do anything wrong. Others stopped doing anything at all.

The most grown-up thing to do in these kinds of situations is to ease into them. Instead of running away from uncomfortable feelings, accept what’s going on. Admit your mistakes. Embrace the fact that no one is perfect. Everyone makes a mistake or does something embarrassing at some point in their lives. most of the time, often!

#7 You Would Be Loud Too If I Was Riding You

There are very real benefits to letting yourself feel embarrassed. For one thing, you stop those feelings from growing into a deep sense of shame about your past. It’s important to fight back against shame because it makes you question everything you do.
Also, when you show that you’re slightly embarrassed instead of trying to hide it, you improve your reputation with other people. People are much more likely to like you if you’re being honest.

Which of these images did you find the most amusing? How bad did the second-hand embarrassment make you feel? What’s the strangest or most embarrassing thing that’s ever happened to you?

#12 How To Make Pregnancy Announcements Even More Uncomfortable

#13 My Friend Meant To Text Me, But He Texted The Girl He Had Just Gone On A Date With Instead

#17 This Guy Found Me On His Wife’s “Suggested Friends” On Facebook Then Googled Me And Used My Business Number To Text Me. Gross

#18 On This Day John Lennon Died, Spotify Didn’t Know That

Someone In This Online Group Wanted To Know, “What Do You...

28 Photos of Children Who Look Almost Exactly Like Their Parents...

Scientists Say There Is A Body That Is Perfect For A...