Home Inspiration Parenting Daughter Sneaks a Rum and Coke Into Her Father’s Hospital Room So... 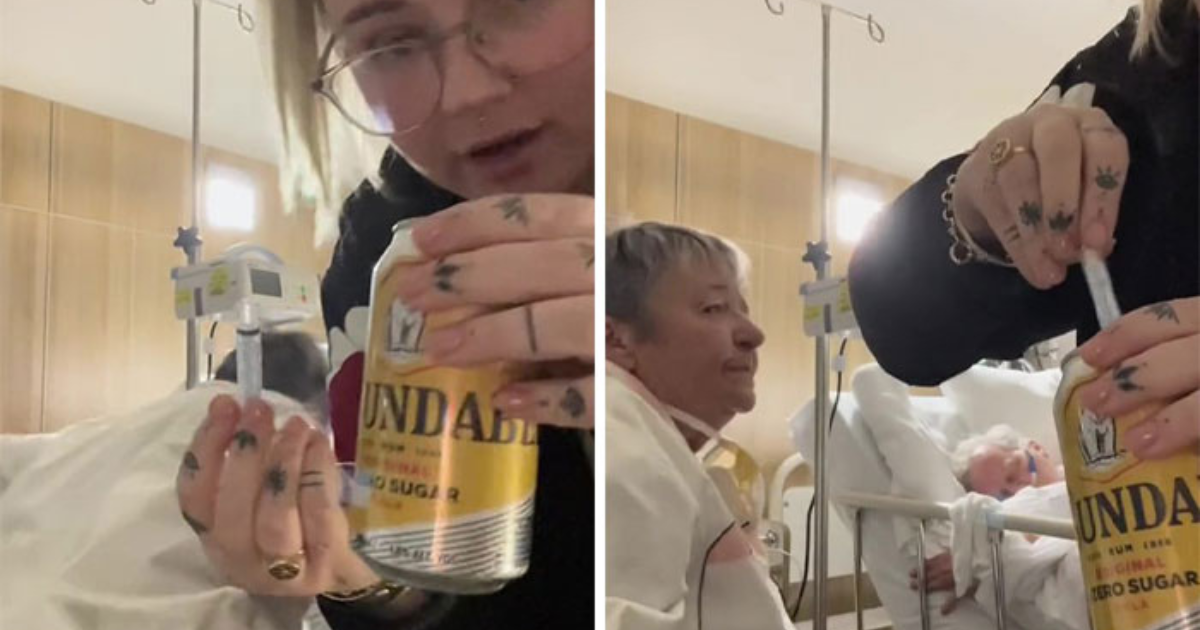 “My life has been full, and everyone has been nice to me. So, boy, turn on that fiddle and pour me one more drink. I’ll leave without a trace when the sun comes up. “But today, the world is mine,” sang Enter The Haggis.

Dear reader, get ready because this story is as good and as sad as any other. A story about both sadness and joy. A celebration of a life well lived and a memory that will stay in the minds of millions of people for years to come.

One daughter gave her dying father rum and cola, which was his last wish. She filmed every moment they spent together and posted them on her TikTok account. Thousands of people came to show their love and wish the family well. Let’s get into the details, and for your own good, dear reader, please grab some tissues.

Penelope Ann was facing a situation that most kids fear. Her father’s time on earth was over. He was told he had chronic obstructive pulmonary disease (COPD), a lung disease that makes it hard to breathe. He had fought hard and long against a disease that would kill him, but it was finally time for him to rest. It would be the last time they saw each other.

Penelope went to the hospital with her mother. She made a 15-minute video of their trip so she could remember every special moment. She posted one of them to her TikTok account. The 27-second clip showed that she snuck in a can of Bundaberg rum and cola, which was her father’s favorite drink, to give him the best send-off.

She said in the video, “I came ready for the send-off.” “Give him a little taste here,” her mom said, as they were about to give him his last drink. She told her father, “We brought you rum,” while Penelope made the drink. “We’ll put it in a syringe and give it to you through your mouth.”

Penelope got close to him and put a small amount of rum and cola in his mouth. She asked her dad if it tasted good, and he was seen enthusiastically nodding. This made the two women laugh. In the clip, Penelope says, “Hell yeah!” He left soon after that.

HER DAD WAS OVERJOYED WITH THE DRINK.

“One last drink with Dad before his spirit returns to the universe,” the video’s title said. We won’t see each other again, old man. I love you.”

At the time of writing, the video has been watched 2.5 million times, and thousands of people have sent their best wishes and praise for the kind act, which has warmed hearts in Australia and around the world.

Since her father died, Penelope has been putting videos on her TikTok. The most recent one was a week after he died. She said, with her mother close by, “Dad gave us a beautiful sunrise.” Her dogs have not left her alone since, and her father’s pup, Dinky, has been very confused as to “why dad hasn’t returned home this time, and I wish there was a way for me to explain to him what’s happened.”

“The hardest part was walking to my mom’s place and seeing dad’s seat empty on the couch,” she continued. At the end of the video, Penelope showed the special bottle of rum that her dad had kept for years but never got to drink. “He always said that he would on his deathbed,” she said.

father’s pup, Dinky, has been very confused as to “why dad hasn’t returned home this time

The idea of having one last drink has been around for hundreds of years. Alcohol is always a part of a party, and drinking is an important part of celebrations in most cultures. We make toasts to other people, so why not to ourselves for a good life? And the tradition of “pouring one out” can help people who can no longer drink alcohol themselves.

In a more formal way, the ceremony is called “making a libation.” It was first seen in ancient Egypt. People there often drank water instead of alcohol because they thought the water was good for life.

When translated, the Papyrus of Ani says, “Pour a libation for your father and mother, who are resting in the valley of the dead.” Even if you are away from home, don’t forget to do this. As you treat your parents, so will they treat you. “

Kate Wight thinks that the whole point of the gesture is to include our loved ones in our lives even after they have died. All that is needed is a little bit of alcohol, a few kind words, and a pour to the land beyond.

No one ever tells you what it’s like to lose a parent. No matter how hard you try to picture the moment, going through each possible outcome and focusing your mind, the heartbreak is impossible to picture, even if you are good at visualizing.

Grief is like being hit with a full-force bag of bricks, and it hurts like hell whether you have your hands up to soften the blow or not.

Healthline says that there isn’t just one way to deal with grief. It’s normal for everyone to feel and deal with loss in their own way. To start getting better, it’s important to remember that what you feel is real and to let yourself feel the loss fully.

Some people get over their sadness quickly and can move on with their lives, leaving their sadness behind. No matter how expected the death was, some people needed more time and help.

It might seem hard or even rude to take time for yourself, but as you heal from your loss, it becomes even more important to put your health first. Life goes on. You can click the link here to find more resources and information.

We hope that Penelope and her family can get through this very hard time, and we’re proud of them for doing something so kind for their father and husband.

It might make other people want to do the same thing, because who wouldn’t want one last drink before going on a trip to a place they don’t know?