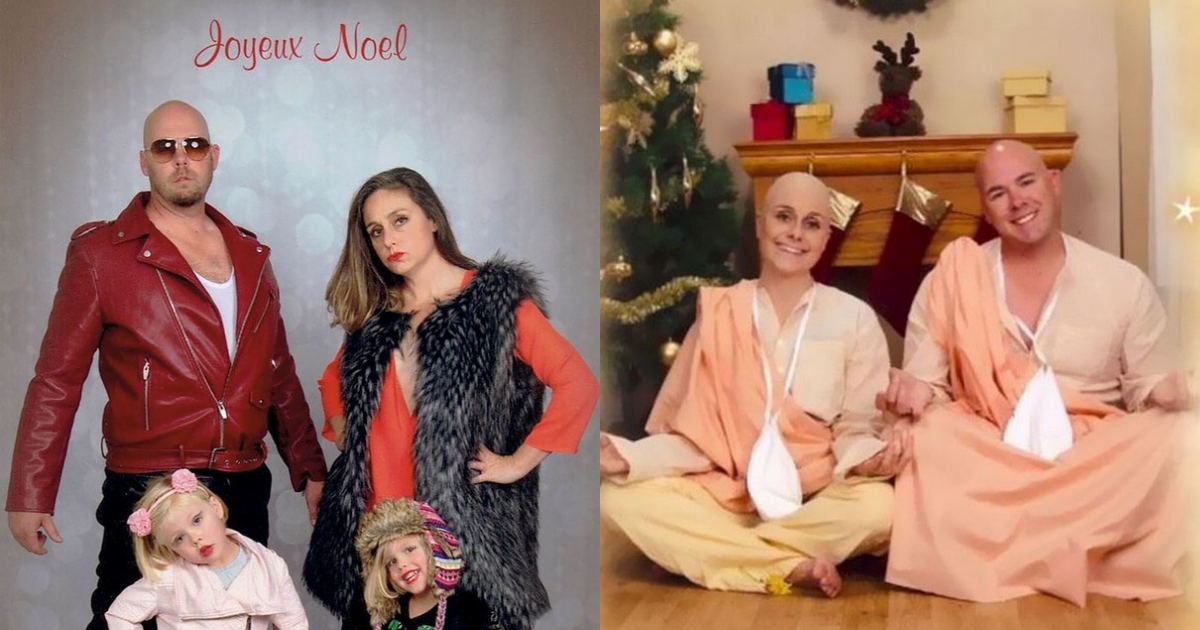 You’ve probably never seen the funniest family Christmas cards. The Bergeron family has been manufacturing creative and amusing holiday cards since 2003, and they show no signs of stopping.

Mike Bergeron, his wife Laura, and their daughters Gigi and Juju have made family portrait photoshoots an annual event. Each December, they adopt a new knee-slapping theme.

They always seem to pull it off as a team, whether they use pop culture, local culture, or humiliating family images. Special credit goes to the JC Penney Portrait Studio, which has seen them from “white trash Christmas” to a drag ensemble.

Scroll down to see Mike Bergeron’s Christmas card editions and read his story.

FIRST CARD The original concept was “Plugs & Juggs,” but we chose this photo for Laura’s priceless facial expressions. “Forty & Fighting It” I had to ask the photographer to shine the light directly down on me since it was reflecting off my head and making me look bald. I told her I wanted baldness. She didn’t know we wore costumes.

When I went to JC Penney Portrait Studio to pick up our cards, they were busy with the Christmas rush, and the manager (who was also the cashier) was clearly stressed out, answering phones, coordinating photo sittings, delegating to her employees, and working through the cash register queue. When it was my turn to be helped after 10 minutes, she immediately went into sales mode, taking over the transaction and yelling at her customer service track while doing other things and not giving me her full attention.

In the midst of her stress, she just gazed at me in astonishment while the cashier next to her stopped what he was doing, looked at the card, and said, “Dude, that’s fantastic!”

Her —”Welcome to JC Penney Portrait Studio. How can I help you today, sir? “

Her—”Okay, what is your last name?”

I said, “It’s Bergeron, but I have my receipt right here if that helps.”

Her—kay…Well, I see that your wife is pregnant… I hope you will be coming back to JC Penney to take your baby pictures. “

Me (smiling at the realization that she doesn’t get the joke) – “Actually, she’s not pregnant…” And if she were, I wouldn’t let her drink beer or smoke cigarettes. And, as you can see, I don’t have a mullet. It’s a joke card. “

As I got my cards and left, the manager stood there in complete shock, her head clearly frozen as she realized that her sales training had failed her.

At Bergeron, I knew I’d lose my hair. We’re taught from birth to accept hair loss. At 32, I knew my days were short and if I wanted to make fun of being bald, this would be my final chance before it became a reality. I had Laura shave my head for the photo session, and I’ve been bald ever since.

I had to go bald for a few weeks until the holiday card was processed and shipped, but I didn’t want to give anyone hints. When people asked me why I shaved my head, I’d make up excuses like “I joined a cult,” “I’m a bigot,” or “Chicks seem to adore Vin Diesel, so I gave it a shot.” “I’m a competitive swimmer and wanted to cut lap times,” was another argument

. A few years later, my friend Kristine came in with a friend. We spoke, I prepared them some special shots, and then Kristine went to the bathroom. Her friend said, “So, Kristine told me you’re a swimmer.” Who still thinks I joined a cult?

Jeremy worked in a photo studio before we started this ritual. If he thought a family portrait was hilarious, he’d print one and hang it in his living room. One photo, in particular, was so delightfully ridiculous and uncomfortable that it remained with me. This card recreates its magic. We fall short, but I hope it still brings some holiday cheer.

Some “purists” claim we cheated by Photoshopping this card. We love those who love it. We dressed up and took a photo for this card (we even got a pitchfork). Since the original work was painted on canvas and didn’t look like a photo, we decided to modify our shot to look like the artwork.

We’re thrilled with how it turned out, despite not being graphic designers. Anyone who thinks we took the easy way out is clueless. Laura’s grandmother loved this card the most. Oh, and for those who say the person doesn’t look like me, wait until my dad’s side relatives see this page and say I look like Grandpa Bergeron. Haters, shrug!

We started late this year, so there was a one-hour wait at JC Penney for our picture. We walked the mall and ate in the food court. We should’ve brought flowers.

favorite! When a card seems real, it’s special. Again, we couldn’t take the picture until after Thanksgiving, so we had to wait an hour to get into the JC Penney photo studio. Laura was worried about walking down the Westminster Mall in our attire, but I reassured her, “Seriously?” We’re untouchable! No one made eye contact with us.

Cheese balls, fruitcakes, and hams for your holiday table! This card depicts our goals from the start. The awkwardness of holiday family photos inspired our idea. We wanted to capture discomfort (in a next-level way) and offer everyone we know a humorous holiday card. During the holidays, they enjoyed observing their guests’ reactions to the humorous card. As a bald man who’s always known he’d be bald, I’ve always wanted a combover since they’re so ludicrous. This card helped me to achieve a long-standing dream and save it forever.

I adore this photo’s concept, although it could’ve been better accomplished. We look funny, and Gigi’s cuteness adds to the card, but I think this concept might have been our best card ever if we had done it well.

This is your legacy, girls. Embrace it!

I doubt anyone at the JC Penney Portrait Studio thought twice about Laura and the daughters, but it was a busy year, and we waited 45 minutes for the photographer, so I’m sure my presence made many people uncomfortable in the waiting area. I had to shop for shoes (thanks, Lane Bryant) and shave my legs, so you can imagine how happy I was when we chose a waist-up shot. Those boys are really cute! If we’d given Gigi glasses, she’d have resembled Ralphie.

Spending the holidays with the Bergerons is priceless.

A year ago, Gigi called me “cousin Jerry.” I took it on with her sister, and I started talking to them like Cousin Jerry. Since then, he’s become a regular in our home, so we thought we’d share him with you this Christmas season. If you’re lucky, you may see “Creepy Larry” and his family in a future card. I say this every year, but Gigi is killing it!

This year, we used a photographer (thanks, Marco Montenegro) at a local beach instead of the JCP Portrait Studio. This is our nod to the classic Christmas card subject, “Look at us in a tropical paradise while you’re freezing… don’t you wish you were us?”

These Creative Condom Ads For Durex Will Wake Up Your Dirty...