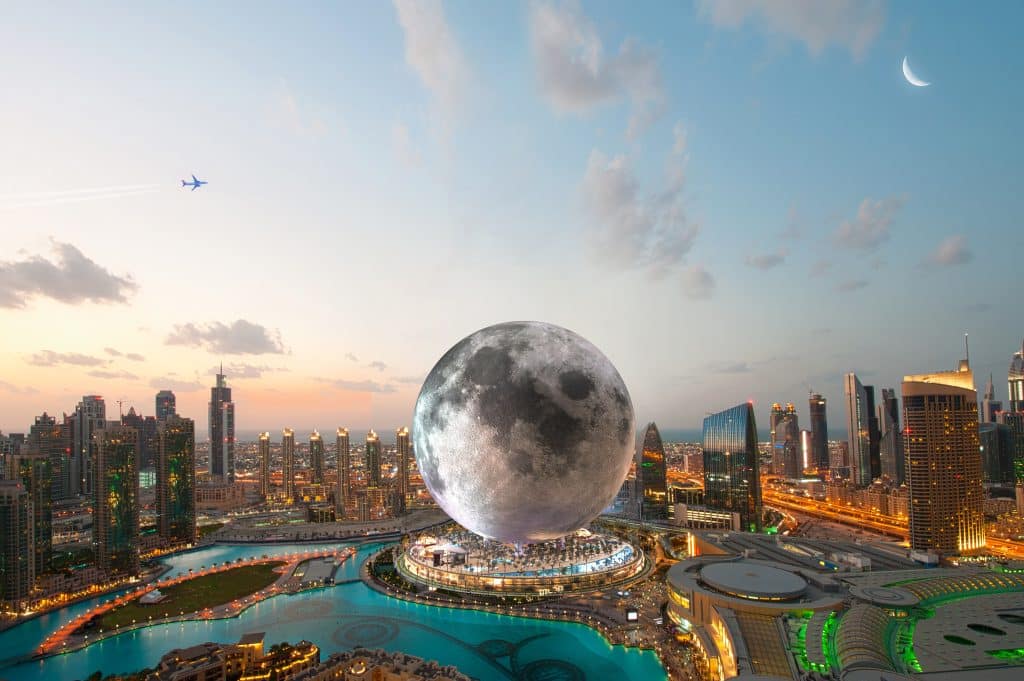 After establishing itself as the global capital of opulence, Dubai is set to welcome a massive resort in the shape of the moon. According to Arabian Business, the resort would be built by the Canadian company Moon World Resorts (MWR) so that tourists could take cheap trips into space on Earth.
This lunar-themed, ultra-luxury resort is expected to take 48 months to construct and will stand 735 feet tall when finished. According to the design firm, “Moon Dubai” will boost the emirate’s economy in a variety of fields, including the tourism industry, theme parks, education, green technology, and environmental protection.

Sandra G. Matthews and Michael R. Henderson, who started Moon World Resorts, think that Moon Dubai will be the largest and most successful modern tourism project in the entire MENA region. They think that it will double the number of tourists who visit Dubai every year because of its global appeal, brand awareness, and unique multiple integrated offerings.

The spa and wellness area, nightclub, event center, global meeting place, café, and in-house “moon shuttle” were just some of the amenities available to guests of the five-star resort. The hotel will serve as a training center for astronauts from several space organizations.

The Canadian firm also has plans to build “Sky Villas,” or moon homes, into their designs, the media site said. Mr. Henderson said, “About 300 units will be offered for purchase, and owners of sky villas will be invited to join a special members club at Moon.”

The National reports that the building of the Moon resort will cost a whopping $5 billion, with a yearly income forecast of $1.8 billion. Currently, the firm is securing the necessary licenses and organizing promotional road shows to introduce the Moon to potential customers. After this, the company will spend the next year in a phase called “pre-development,” and then it will spend the next four years in a phase called “build-out.”

MWR plans to license four Moon destination resorts around the world: one in North America, one in Europe, one in the Middle East and North Africa, and one in Asia.

The Devir Family Welcomed Their Son Into The world. Here’s How...

I Create Glow-in-the-Dark Looks With Makeup, UV Paint, and Light.