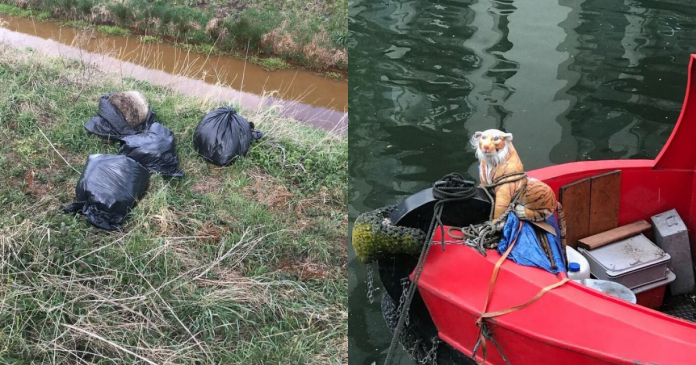 The Royal Society for the Prevention of Cruelty to Animals, or RSPCA, works hard to help animals in trouble. Every 30 seconds, the organization gets a call, and their inspectors responded to almost 300,000 incidents last year.

Even though most of these calls are pretty serious, there is always the odd one that turns out to be a funny mistake. The RSPCA has told us about some of the funniest things that have happened to them in 2021. Scroll down to read about the funny fails that came out of nowhere.

#1 Another Sequel To Frozen?

Shane Lynn, an RSPCA animal rescue officer, heard that a frozen duck was stuck in an icy pond in Middlesbrough.

Shane says, “The person who called said the bird had been stuck for two days in the frozen pond and couldn’t move.” “As soon as I got there and saw the pond, I knew I wouldn’t have to help because the duck was just a plastic toy.”

Inspector Dale Grant got a call about a dog stuck on a canal boat in London that was yelping and crying. Dale says, “I was really worried that I might walk into a terrible situation with a dog in a very dangerous situation, but it turns out I didn’t need to worry.” It turned out that the “dog” was actually a stuffed tiger tied to the boat’s bow!

Animal rescue officer Lisa Miller rushed to Woolwich, London, after getting a call about a bird stuck in a flagpole on the roof of a block of flats.

Lisa says, “The woman saw the bird stuck between the flag pole and the string.” She said that the bird was trying to fly away but couldn’t. When I arrived, I realized I didn’t need to send anyone to help because it was just a plastic bird scarer. She was very embarrassed, but we laughed about it, and I told her she should go to Specsavers!”

Beth Boyd of the RSPCA was asked to help save a snake that was part of an art installation.

She says, “That was a very strange job! I didn’t have to look long to find the snake when I arrived; it was a taxidermy snake arranged in a block as part of an art piece. I did laugh out loud. I guess that’s what art is for, and this did just that. I put a note on the piece that said the snake wasn’t real and that I didn’t want any more calls.”

When RSPCA animal rescue officer David Holgate got a call about these bags, he thought it was about something else.

He says, “A person walking by saw a bunch of black trash bags, and one of them had a hole in it where the body of a dead badger could be seen.” “I thought I’d be looking into the suspicious death of a beautiful badger, but when I got there, all I found were bags of garden waste that had been dumped.” “The clumped soil and plant roots in a flower pot that had been turned over did look strange from a distance.”

After the river broke its banks and flooded nearby fields, a driver called the RSPCA to report a bird stuck in electric fencing in the water.

RSPCA officer Graham said, “I went out to check on the bird and was going to call the water rescue team for help, but before they left, I got closer and got a good look at the “bird,” which turned out to be a white plastic chair floating in the water!”

When a woman and her son saw a snake on a garden chair, they were scared and called for help. They were surprised to find out that the snake wasn’t real.

Martyn, an animal rescuer, says, “It didn’t take me long to figure out that this King Cobra was made of plastic, which is lucky because they are poisonous snakes that can kill you.” “We are trained to be able to recognize snakes, but most people don’t know how to do that, so I can see how the sighting might have scared them.” “It looks like the toy came from a neighbor’s kids’ garden, so the snake is now back where it belongs!”

In Greater Manchester’s Prestwich, a man saw a 3-foot-long snake in his garden and watched it for a while. After two hours, the snake still hadn’t moved, so he called the RSPCA.

Inspector Demi said, “When I got there, I was ready with my grabbing pole to grab the snake safely.” In these situations, it’s very important to try to keep the animal as safe as possible, especially if the snake is thought to be poisonous. But it didn’t take long for me to figure out that this snake was made of plastic.

20 of the most stunning Christmas treats people have ever made

Daughter Sneaks a Rum and Coke Into Her Father’s Hospital Room...

This “Pet Taxi” Driver Has Taken 30 Selfies With His Customers.

Makeup Artist Turns Into Any Celebrity She Wants