Home Don't miss it The Danish Mum Reveals Her Signature Triplet Bump And Shares The Experience... 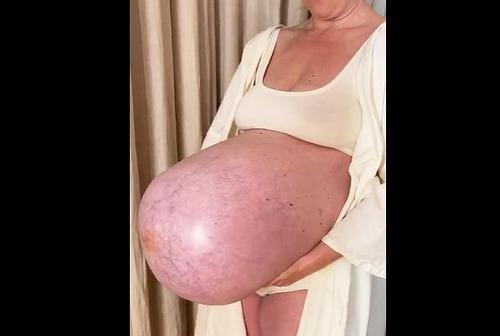 Pregnant people go through a myriad of changes. From adjusting to everyday life to preparing for daycare, many factors go into preparing for a baby. It is common for women to gain weight during this time as they become confident that their unborn baby is getting all the necessary nutrients, preparing for a safe and healthy birth. Additionally, pregnant women also have a visible bump that continues to grow throughout pregnancy, showing how well their baby is developing.

Michella MeierMorsi from Copenhagen, Denmark shocked the internet with her baby bump, especially because of its size and the way it extended from her body. She was pregnant with triplets, leaving her with a baby bump that seemed to have grown outward rather than up and down.

The mother posted her pregnancy journey on her Instagram account, documenting everything up to the birth of her children on January 14, 2022, and what her body looks like now after giving birth. She also spoke about her fears and her excitement about welcoming her newborns.

Today, Meier Morsi and her husband Mark are enjoying life as a family of seven, as they already had two children before the birth of their triplets. Their triplet names are Charles, Theodore, and Gabriel. Parents certainly have their hands full with their little bundles of joy. Along with showing off adorable photos of her babies, MeierMorsi also showed off her belly progress.

According to the Daily Mail, MeierMorsi admitted just days before giving birth to her triplets that she “didn’t feel ready” to welcome three babies into the world, despite being in extreme pain towards the end of her pregnancy. The mum also documented her pregnancy on her Instagram, showing how her belly seemed to grow “straight” rather than “up and down,” according to the Daily Mail. On January 13, 2022, MeierMorsi posted a video highlighting her baby bump at the 35th week of pregnancy. While the mum-to-be expressed her excitement about meeting her babies, she also opened up about her nervousness about the C-section, something she’s had a bad experience with in the past. However, MeierMorsi tried to remain optimistic. “We kept them for over 35 weeks,” he explained. And so we really can’t do more than hope for the best!

Many people were left speechless after seeing mum’s belly, some even calling her a “superhero”, according to the Daily Mail. MeierMorsi then uploaded a photo showing what her belly looked like around 10 days after giving birth. Her once very big, straight belly had taken on a new look as she was left with loose skin.

The mom posted a sweet photo of her five kids. She spoke of the difficulty of looking after them all while she was still in hospital, saying she was “torn between two sets of children and two different needs.” Mark cared for the older girls at home while MeierMorsi stayed in the hospital with the triplets. Luckily, the whole family is now together and enjoying life as a family of seven.

MeierMorsi has also opened up about her postpartum recovery on her Instagram, where she has more than 318,000 followers. She uses her platform to share her experiences as a mother. The Sun reported that the mother wrote: “The birth went much better than I feared. It went wrong along the way, but it wasn’t as bad as last time.

MeierMorsi also shared a photo of her stomach after giving birth 10 days and said it was “much smaller already” but was “heavy and incredibly painful”. She added, “For the past few days my stomach has felt like a big black mark. I’m also having trouble breathing,” but the new mum-of-five also said it would be “exciting and nerve-wracking to see how my body intends to heal.

Pregnancy affects all women differently; some women’s stomachs recover quickly while others remain distended for months. A condition called diastasis recti, in which the left and right abdominal muscles separate, can make things even more complicated when it comes to recovery. MeierMorsi did not say if she had experienced such conditions, but clearly carrying more babies to 35 weeks is a feat that many other bodies may not be able to cope with.

While the bodily effects of multiple pregnancies were covered by MeierMorsi, she also shared some of the emotional issues that arise for her other children in one post, she wrote: “But I do not understand my daughters in any respect after eleven days. They are angry, rebellious, extraordinarily bored, and simply unavoidably unruly and rude. We omit them and, by some means, allow them. And it is absolutely unpredictable

Having a sort of big own circle of relatives is difficult. However, primarily based on different messages from MeierMorsi, he says it is sincerely really well worth it.