Home Inspiration Animal The Dog Walks Into A Texas Police Station To Report Himself Missing.’ 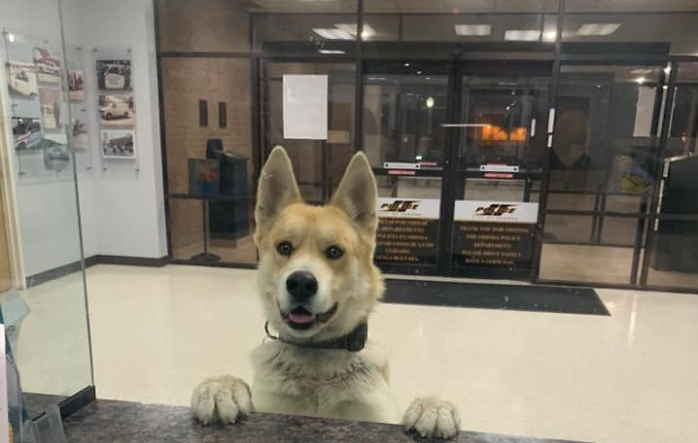 Most of us consider our pets to be the greatest, smartest, and most beautiful animals to have ever walked the Earth’s surface. For some people, this is true, but for others, the pure and unconditional love that every parent has for their child blinds them a little. I’m referring to the dog (I mean child).

Meet Chico—a very smart boy who reported himself missing to the Texan Police.

This dog is a wise boy because he realized that the best place to go after losing his human is the police station. Chico, being the good boy that he is, pondered applying for a job as a K-9 for a little while after reporting his problem. Scroll down to read about the rest of his adventure.

The officers at the Odessa Police Station in Texas received an undoped visitor last week – a polite dog who gently placed his paws on the front desk to inform them of his problem. It seemed like a dog was missing, a human he probably thought to himself

Sergeant Rusty Martin, the officer who received Chico, said the dog appeared unconcerned about his newfound status. It was as if he had just taken a stroll through the neighborhood and decided to pay a visit to the helpful officers to make their day.

In return, the officers made an effort to make his day a little brighter. They claimed he was showered with “a lot of love and attention. “We were all thrilled to have him here,” Martin added. “We had a tennis ball and tossed it around the lobby for a while. “He was adored by everyone. When the fun was over, it was time to make certain Chico was returned to his rightful owners. But that wasn’t as simple as it sounds because his ID tag had fallen off his collar. As a result, animal control was called in to look for a microchip.

Chico felt his time at the PD had come to an end and slipped away before animal control arrived. He returned home immediately and communicated with his family the next day. Sergeant Martin stated, “He ran out just as quickly as he came in. “The next day, the owner responded that it was his dog and that he had returned home. “He lives a mile away from the station.

People on the Internet fell in love with the doggo

20 Funny, Petty, And Rude Things People Have Seen Done To...