Home Inspiration Animal This Orange Cat Loves To Go On Adventures And Makes Everyone He... 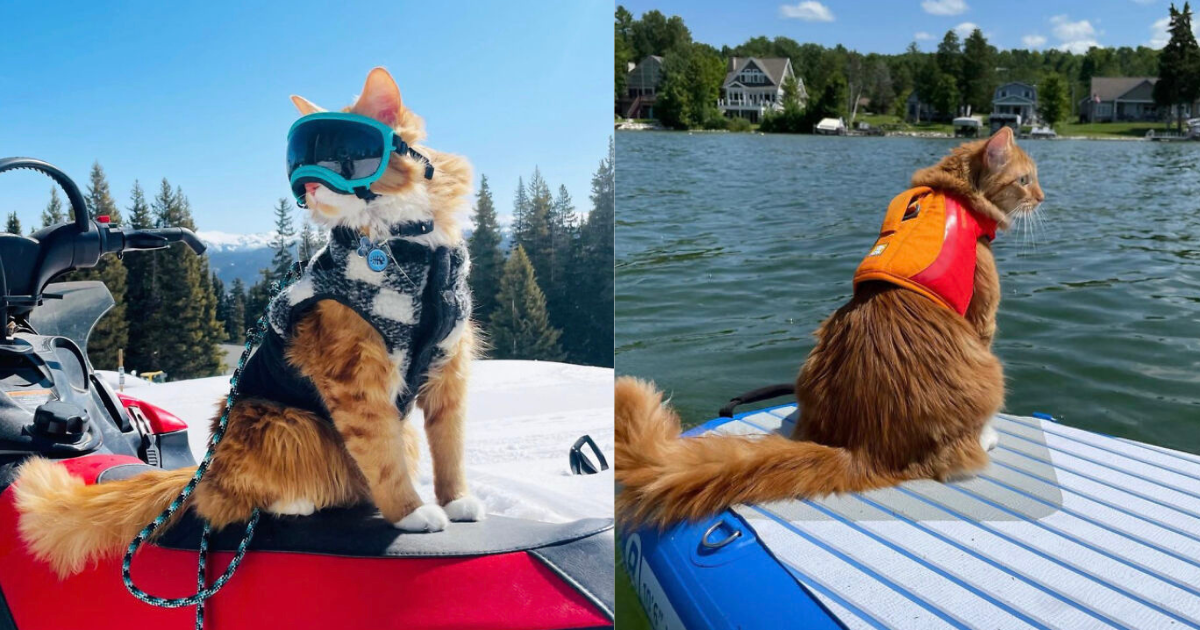 Liebchen is an orange cat who is friendly, active, and likes to play. As soon as we saw him at the Rifle Animal Shelter near Aspen, Colorado, we fell in love with him. Once we brought Liebchen home, he would scream-meow at the door to go outside and explore. We got him a harness, and the rest is history.
Liebchen was 10 weeks old when he went on his first hike with a harness and leash. He comes with us everywhere we go. He skis, snowmobiles, hikes, camps, paddle boards, swims, goes on road trips, flies in planes, and does everything else.

Here’s Liebchen, our daring orange cat we adopted from the Rifle Animal Shelter in Aspen, Colorado.

A friend of ours sent us a picture of Liebchen that was on the Facebook page of the Rifle Animal Shelter. Something about the look in his eyes, his half-white mustache, and the fact that he was so small and full of life made me like him. When we went to meet him, he was by himself in a corner, hissing at the other kittens who were playing, as if he was very upset with them.

The cat wanted to go outside and look around as soon as we brought him home. Liebchen went on his first hike at 10 weeks old!

He wasn’t afraid; he was just annoyed with the other kittens. He wasn’t scared because he was lying down comfortably. It was almost like he was saying, “Don’t adopt them, adopt me!” We thought this was sassy and funny, and it showed right away what a big personality he has.

He waddled up to us, put his head on our hands, and started purring as soon as we picked him up. We knew right away that he was perfect for us because of how funny he was, how big and wide his eyes were, and how much energy he had in general. He talked a lot from the first time we met him. We liked it a lot. He still talks to us all the time and tells us how he really feels about everything.

Liebchen is a German word that means “sweetheart.” My mom had a cat named Liebchen when she was about my age. We liked it because it was different, so we gave it to our new little furball. It also helps us start conversations with new people we meet when we’re out and about or traveling.

Liebchen really hasn’t cared what we put on him. Most of the time, we try to only put things on him that is useful. It’s almost as if he knows that the jackets and goggles are there for a reason. The goggles protect your eyes from getting sunburned, snow blindness, and windburn. They also help keep dust and sticks out of his eyes in the summer. We only put on his coats when it’s cold and he needs them.

He does have some cool things, like sunglasses and tropical shirts, but he just wears them and hangs out with them on. If he ever looked stressed or unhappy about something, we would never make him wear anything. We think it’s very important to pay attention to his body language when we’re having fun or going on an adventure. Liebchen is mad about his bag.

Getting ready for skiing

Liebchen’s favorite thing that we do with him is a hike. He loves going on adventures in the woods and the desert. He loves to jump from rock to rock and log to log. He likes to go to new places and smell them and find new plants, bugs, and animals also likes to explore the different kinds of land in the Western US.

Liebchen likes to walk next to us, in front of us, or behind us on a trail and loves being outside, but there are a lot of dangerous animals where we live, like mountain lions, bobcats, foxes, eagles, hawks, and bears.

We’re too scared to let him go outside on his own, and it’s honestly too dangerous, so we’ve adjusted, and now he loves his walks and hikes. Hikes let him enjoy the outdoors in a safe way.

He also likes to ski with us, but you can’t do that all year. Sometimes he rides on our shoulders or in our backpacks and just sticks his little face in the wind. He likes to feel the wind in his whiskers. He also likes to take naps on the gondola or chairlift.

Hiking in the Maroon Bells in Aspen, Colorado

What do you like most about Liebchen? He is friendly and loud, and everyone he meets smiles when they see him. This cat has no fear and loves to meet new people and make friends with dogs. He will become your new best friend right away and want to sit on your lap and tell you about his day.

You might meet your new best friend on a trail, at the top of a mountain, in a restaurant, or even on a ski lift.

We’ve all been through a lot in the past few years, so we want to share his happiness and make the world a better place, one smile and cat adventure picture, and video at a time.

Every year, people can adopt millions of cats and dogs around the world. We want to stress how important it is to adopt a friend from a shelter. If you can’t adopt, you might want to think about making a donation to your favorite shelter to help them out.

Animals in need are very thankful that you took them in and gave them a home. Liebchen has made a big difference in our lives, and we’re sure that other cute animals can do the same for other people.

Before buying a pet, we want everyone to think about rescuing or adopting one from a shelter. Every year, there are millions of animals that can become your best friend. Animals that have been rescued have a special quality that makes them a great addition to the family. It’s almost like they know you saved them, but we’re sure they’ll do the same for anyone who takes them in. We often say that Liebchen saved us.

There is a rescue animal for everyone, no matter where they live or how big their family is. Animals have so many different personalities that you’re sure to find the right one for you. We really believe that any cat can become an adventure cat, and any rescued animal can become your new best friend.

Unique Miniature Worlds are Created by Artists Using Food as Their...