Home More History This Roman Bathhouse Was Built More Than 2,000 Years Ago, But It... 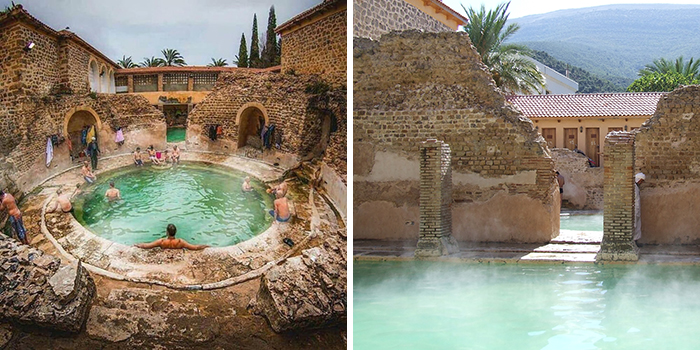 A Roman bathhouse that was built and used more than 2,000 years ago is still up and running and being used the same way it always has.

Sometimes history will be remembered for thousands of years because of the new ideas they brought and the things they left behind. The Romans might be the most well-known of these times. We still talk about a time in history that happened thousands of years ago, and some of what the Romans left behind is still in use today.

It’s clear that the Romans made things that would last. Algeria, a country in North Africa, has evidence of this that is still standing and being used. The Roman bathhouse, Hammam Essalihine, has stood the test of time and is still used today, more than 2,000 years after it was built. It’s not just a place to see; you can still bathe there.

The people who live in the nearby town of El Hamma take advantage of having a piece of history right outside their door. Tourists also visit the baths in large numbers. Every year, about 700,000 people. even though the infrastructure around the baths isn’t very good. The Romans were known for building roads, but it’s clear that those roads haven’t held up over time.

But you should definitely go to Hammam Essalihine if you can. The waters in the bathhouse are full of minerals, and it is thought that they can help people with rheumatic, skin, and respiratory diseases. But it’s not just a warm pool out in the middle of nowhere. If you do go to the bathhouse, you can also get a massage or try out hydrotherapy.

In the fast-paced world we live in, it can be hard to keep history alive and make sure it doesn’t get lost. But sometimes we forget how big the world really is. There are so many places that haven’t been touched by the industrial age or money-making businesses. This is a piece of history that has been around for 2000 years and still does the same thing it did back then.

30 Amazing Things People With Extra Time Made and Shared on...

This Seattle Gas Station Has The Most Amusing Signs Ever.

I Rephotographed Kurt Hielscher’s Photographs To Demonstrate How Things Have Changed...