Home Inspiration This Woman From Utah Learned To Accept Her Vitiligo Through Fitness And... 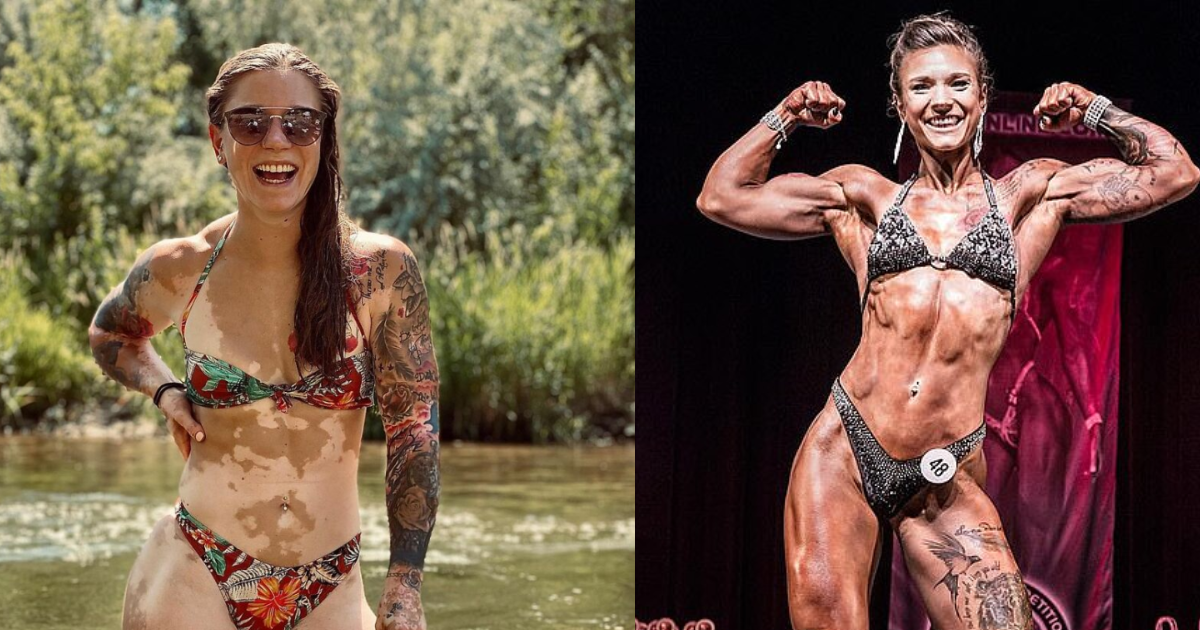 A woman who suffers from severe vitiligo and who used to spend hours sobbing in front of the mirror over the white patches that were growing across her skin has said that taking up bodybuilding helped her gain confidence in her physique.

Antonia Livers, a personal trainer from Utah who is now 27 years old, first saw white patches on her eyelids when she was 14 years old. She didn’t recognize the symptoms and sought medical attention when she was informed that she had vitiligo, an uncommon disorder affecting the skin.

Meet Antonia Livers from Utah, USA, and she has vitiligo

When a person has vitiligo, their skin loses its normal color because melanin isn’t being produced in the affected areas. Antonia covered up her vitiligo with makeup when she was in high school to escape bullying. Antonia’s vitiligo had spread to her arms and legs, so she hid the ugly spots by wearing long-sleeved tops and pants. Because she was fully covered, Antonia didn’t have to worry about people making fun of her appearance.

Antonia spent hours every day looking at her patchwork skin in the mirror, judging herself harshly and crying because of it.

She felt her vitiligo made her unattractive, so she disliked her appearance. She was frustrated that her life was being derailed by a skin ailment she had never heard of before her diagnosis.

Antonia’s anxieties about her appearance made it difficult for her to go on dates because she worried about the reaction of possible suitors.

Taking up weight lifting gave Antonia a feel of control over her body, which she had lost as a result of her vitiligo

“When I was 14, I found the first spots on my eyes.” “At 14, you don’t want to stand out from the crowd of pretty females. Every morning I would look at myself in the mirror and start crying.”

“How ugly am I? Why do I look like this?” I would ask myself daily. “I never asked for those white spots; I never wanted them back then.”

“The white spots on me were multiplying as I aged.”

She began working out in her late teens, and she now goes to the gym four times a week to do cardio and weight training. Antonia took a break from worrying about her vitiligo by seeing how far she could push her body.

I discovered a passion for exercise, and that helped me get over my self-consciousness. Antonia said, “I evolved from self-hatred to self-acceptance to self-love and respect.”

As her confidence rose, she delved into weightlifting

To improve my mind, I had to first improve my physique. My increased physical strength had a profound effect on my emotional fortitude.

Antonia, who grew up in Cologne, Germany, married Poppy Livers, a personal trainer from Utah, when he was 28 years old and playing American football in Germany. Antonio was finally able to become a personal trainer after moving to the United States and doing what she loves after the couple uprooted and settled in Utah in 2017.Antonia’s self-doubts from her adolescent years started to fade as she became in better shape and started to like the way she looked.

My employment was the lifeline that kept me from cutting off contact with myself. To this day, the thought of it still brings me to tears ‘she confessed.

“Being physically active and treating myself kindly helped me pull myself out of that funk.”

Antonia now posts images of herself on Instagram, embracing her vitiligo and reading the encouraging comments sent by total strangers who think she is a “multicolored beauty” and an inspiration.

Antonia has vitiligo, which is a skin condition that is quickly spreading all over her body. She doesn’t try to hide it, though, and instead uses that energy to work on herself and her clients.

Being unique is wonderful, Antonia proclaimed. You can’t be average and expect to be successful, so turn your worries into fierce determination.

“I can’t tell you how much I enjoy my work. Aiding people in their pursuit of better health and fitness is a passion of mine.

The best part of my profession is witnessing patients’ physical and emotional improvements.

Working out is my kind of self-care. We are responsible for managing the aspects of our lives that are under our purview.

Antonia’s husband, Poppy, 28, has also been incredibly supportive of her