Home Don't miss it What Love Means to People with Down Syndrome is Captured Beautifully in... 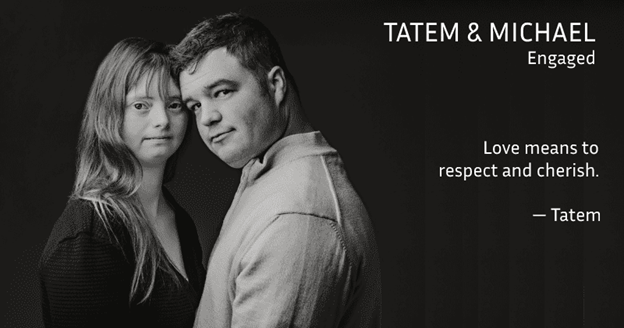 With the assistance of the Canadian Down Syndrome Society, photographer Hilary Gauld was able to capture the beauty of love among people who have Down syndrome.

The CDSS started the campaign to dispel myths about people’s lives with Down syndrome. According to Down Syndrome International, Down syndrome affects one out of every 800 live births. “It meant tons to me to satisfy these couples and individuals, hear their stories, and observe their interactions,” Gauld said. She’s photographed single people, heterosexual couples, and members of the LGBTQ community. Paige and Tyler, who have been together for eight years, are featured in the project, as are best friends Jessica and Matt, new couple Krystal and Tammy, single queer woman Ren, and Kirk and Beth, who have been together for 12 years.

Gauld shared the photos on her Instagram page on March 21, which was World Down Syndrome Day. “My hope is that these stories & visuals simply inspire, educate, and create space for greater visibility of the experiences that adults with Down syndrome navigate, including love,” said Gauld, who has photographed children and adults with Down syndrome for over eight years

The photographs in the series tell the stories of people who have Down syndrome or are in a relationship with someone who does. The goal, according to Gauld, was to be inclusive and show love through the eyes of various people. According to AdWeek, Gauld stated, “The goal of the project is that these stories and visuals inspire, educate, & create space for greater visibility of the experiences adults with Down syndrome navigate, including love.” “All of these examples demonstrate how platonic and romantic love can exist, but not in the same way for everyone—because no community is homogeneous.”

People with Down syndrome, according to the CDSS, rarely express feelings of love. Gauld’s photo project, which relies on the subjects’ own words while also capturing intimate and loving moments, aims to raise awareness. As Laura LaChance, executive director of the Down Syndrome Society of America, stated in a statement, “The depiction of romantic love within the Down syndrome community is rare, making it just one of the many facets of human life that the general public does not consider when observing them.” “People who are affected by Down syndrome.” The lives of people with Down syndrome are full, and they experience a wide range of emotions. Despite this, there is a shocking lack of awareness and understanding about the condition.” “This work will have an impact on the public narrative,” LaChance predicted in a statement released after the exhibition.

Margot Langis, whose daughter Ren is featured in the campaign, said, “To think that there is a need to demonstrate that people with Down syndrome have and desire to experience the same shared relationships and love that others take for granted is surprising to me.” “Love is a human need that knows no boundaries.”

Women As Old As 78 Are Transformed Into Pin-Up Girls, And...

This Woman Began Drumming in 1920 And Is Still Going Strong...

A Three-Year-Old Dressed Up As Famous Powerful Women To Keep Herself...