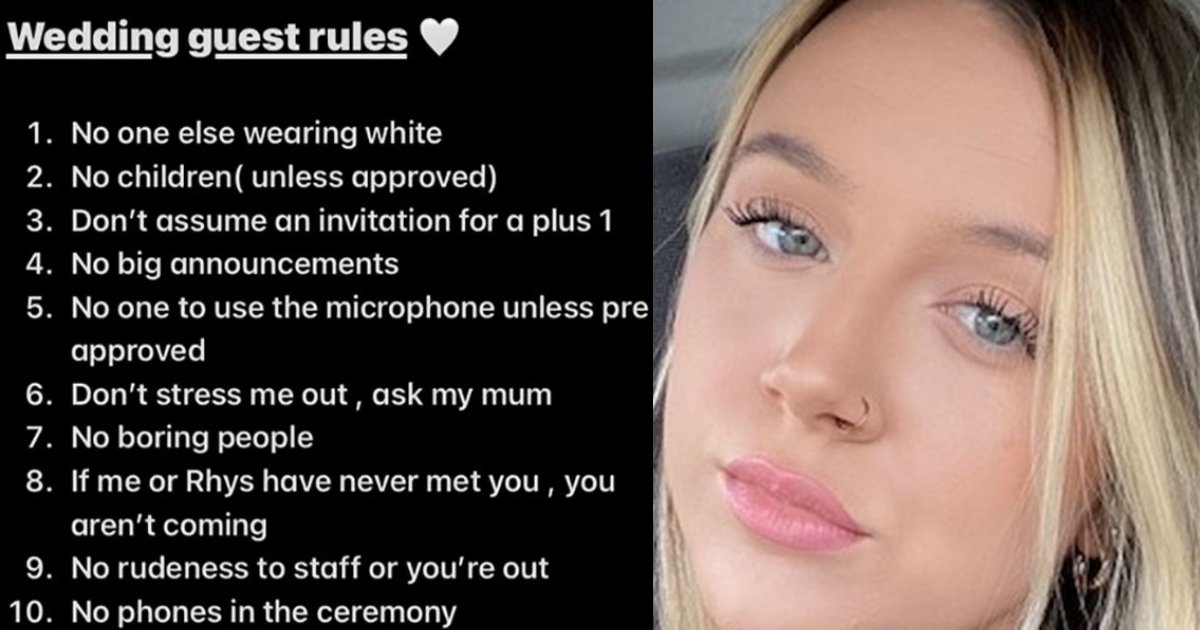 A woman’s list of 13 rigorous wedding rules, which she’s been working on since she was a child, has stirred an internet debate.

Even though she isn’t engaged yet, content creator Kennedy Marks took to TikTok to talk about how she’s been planning her big day since she was eight years old, and all of the details she won’t compromise on when the time comes.

It’s clear she’s thought over every detail, but viewers weren’t sure whether they wanted to attend such an event, and the comments area under Kennedy’s post rapidly erupted into a debate about the kinds of expectations couples can place on their wedding guests.

While guests and how they conduct themselves are certainly key factors in the evening’s events, The Knot’s 2021 Real Weddings Study found that the majority of couples believe that food and beverages are what they should focus on to offer a pleasant and memorable experience.

As a result, there are more people like Kennedy who are more concerned with how their wedding will be spent than with the size of the event itself.

Even if everyone has their own ideas about how to host a wedding, this year’s guests were more eager than ever to attend weddings since everyone was ready to socialize again and was looking forward to an excuse to dress up and celebrate.

Attendance at weddings has increased to 50% of guests, up from 39% in 2019, and 68% of guests are ready to spend more on weddings (as a result of the year-long quarantine)—most typically on gifts from the couple’s registry as a result.

It costs on average $266 per guest, which is an increase over the previous year’s average of $214.

As a result, roughly 60% of couples offer vegan and gluten-free options to their guests.

41 percent of couples ask their guests to ‘unplug’ in order to ensure that everyone is present and having fun (up 19 percent versus five years ago).

Even after the reception is over, around a quarter of couples (27 percent) organize an after-party and brunch the morning after the event (26 percent ).

While we’re debating whether or not Kennedy’s demands are unreasonable, I’d want to take a moment to acknowledge how wonderful it is that we’re once again celebrating weddings. Yay!

The original video already has over a million views

30 Absolutely Hilarious Photos With No Context That getting Stranger As...

26 Bedroom Photographs of Americans Allow Us A Peek Into Their...

A Supportive Mother Posts Pictures Of Her Son At Prom In...